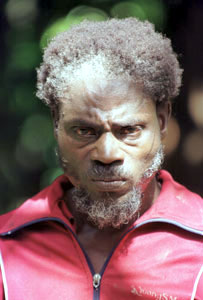 Le Gros
Aly Diabate was almost 12 when a slave trader promised him a bicycle and $150 a year to help support his poor parents in Mali. He worked for a year and a half for a cocoa farmer who is known as "Le Gros" ("the Big Man"), but he said his only rewards were the rare days when Le Gros' overseers or older slaves didn't flog him with a bicycle chain or branches from a cacao tree.


Aly said he doesn't know what the beans from the cacao tree taste like after they've been processed and blended with sugar, milk and other ingredients. That happens far away from the farm where he worked, in places such as Hershey, Pa., Milwaukee and San Francisco.

"I don't know what chocolate is," said Aly.

Aly Diabate and 18 other boys labored on a 494-acre farm, very large by Ivory Coast standards, in the southwestern part of the country. Their days began when the sun rose, which at this time of year in Ivory Coast is a few minutes after 6 a.m. They finished work about 6:30 in the evening, just before nightfall, when fireflies were beginning to illuminate the velvety night like Christmas lights. They trudged home to a dinner of burned bananas. If they were lucky, they were treated to yams seasoned with saltwater "gravy." 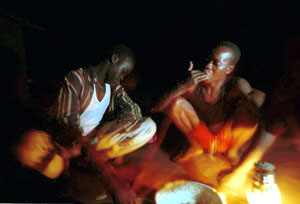 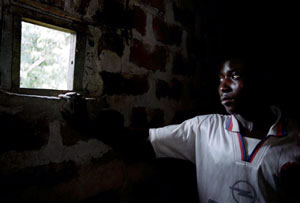 locked in a mud hut with one small window for ventilation

After dinner, the boys were ordered into a 24-by-20- foot room, where they slept on wooden planks without mattresses. The only window was covered with hardened mud except for a baseball-size hole to let some air in.

"Once we entered the room, nobody was allowed to go out," said Mamadou Traore, a thin, frail youth with serious brown eyes who is 19 now. "Le Gros gave us cans to urinate. He locked the door and kept the key."

"We didn't cry, we didn't scream," said Aly (pronounced AL-ee). "We thought we had been sold, but we weren't sure."

The boys became sure one day when Le Gros walked up to Mamadou and ordered him to work harder. "I bought each of you for 25,000 francs (about $35)," the farmer said, according to Mamadou (MAH-mah-doo). "So you have to work harder to reimburse me."

Aly was barely 4 feet tall when he was sold into slavery, and he had a hard time carrying the heavy bags of cocoa beans.

"Some of the bags were taller than me," he said. "It took two people to put the bag on my head. And when you didn't hurry, you were beaten."

He was beaten more than the other boys were. You can still see the faint scars on his back, right shoulder and left arm.

"The beatings were a part of my life," Aly said. "Anytime they loaded you with bags and you fell while carrying them, nobody helped you. Instead, they beat you and beat you until you picked it up again."

At night, Aly had nightmares about working forever in the fields, about dying and nobody noticing. To drown them out, he replayed his memories of growing up in Mali, over and over again.

"I was always thinking about my parents and how I could get back to my country," he said.

But he didn't think about trying to escape.

"I was afraid," he said, his voice as faint as the scars on his skinny body. "I had seen others who tried to escape. When they tried they were severely beaten."

Le Gros (Leh GROW), whose name is Lenikpo Yeo, denied that he paid for the boys who worked for him, although Ivory Coast farmers often pay a finder's fee to someone who delivers workers to them. He also denied that the boys were underfed, locked up at night or forced to work more than 12 hours a day without breaks. He said they were treated well, and that he paid for their medical treatment.

"When I go hunting, when get a kill, I divide it in half — one for my family and the other for them. Even if I kill a gazelle, the workers come and share it."

He denied beating any of the boys.

"I've never, ever laid hands on any one of my workers," Le Gros said. "Maybe I called them bad words if I was angry. That's the worst I did."

Le Gros said a Malian overseer beat one boy who had run away, but he said he himself did not order any beatings. One day early last year, a boy named Oumar Kone was caught trying to escape. One of Le Gros' overseers beat him, said the other boys and local authorities. 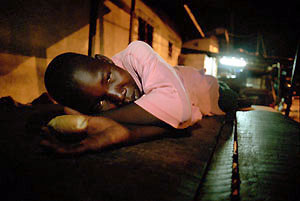 An escaped child slave sleeps on a bench in a city. He carries luggage to try to earn $15 for a bus to go home


A few days later, Oumar ran away again, and this time he escaped. He told elders in the local Malian immigrant community what was happening on Le Gros' farm. They called Abdoulaye Macko, who was then the Malian consul general in Bouake, a town north of Daloa, in the heart of Ivory Coast's cocoa- and coffee-growing region.

Macko (MOCK-o) went to the farm with several police officers, and he found the 19 boys there. Aly, the youngest, was 13. The oldest was 21. They had spent anywhere from six months to four and a half years on Le Gros' farm.

"They were tired, slim, they were not smiling," Macko said. "Except one child was not there. This one, his face showed what was happening. He was sick, he had (excrement) in his pants. He was lying on the ground, covered with cacao leaves because they were sure he was dying. He was almost dead. . . . He had been severely beaten."

According to medical records, other boys had healed scars as well as open, infected wounds all over their bodies.

Police freed the boys, and a few days later the Malian consulate in Bouake sent them all home to their villages in Mali. The sick boy was treated at a local hospital, then he was sent home, too.

Le Gros was charged with assault against children and suppressing the liberty of people. The latter crime carries a five- to 10 year prison sentence and a hefty fine, said Daleba Rouba, attorney general for the region.

"In Ivorian law, an adult who orders a minor to hit and hurt somebody is automatically responsible as if he has committed the act," said Rouba. "Whether or not Le Gros did the beatings himself or ordered somebody, he is liable."

Le Gros spent 24 days in jail, and today he is a free man pending a court hearing that is scheduled for June 28. Rouba said the case against Le Gros is weak because the witnesses against him have all been sent back to Mali.

"If the Malian authorities are willing to cooperate, if they can bring two or three of the children back as witnesses, my case will be stronger," Rouba said.

Ivory Coast authorities ordered Le Gros to pay Aly and the other boys a total of 4.3 million African Financial Community francs (about $6,150) for their time as indentured laborers. Aly got 125,000 francs (about $180) for the 18 months he worked on the cocoa farm.

Aly bought himself the very thing the trader who enslaved him had promised: a bicycle. It has a light, a yellow horn and colorful bottle caps in the spokes. He rides it everywhere.

Aly helps his parents by selling vegetables in a nearby market, but he still doesn't understand why he was a slave. When he was told that some American children spend nearly as much every year on chocolate as he was paid for six months' work harvesting cocoa beans, he replied without bitterness:

"I bless them because they are eating it."